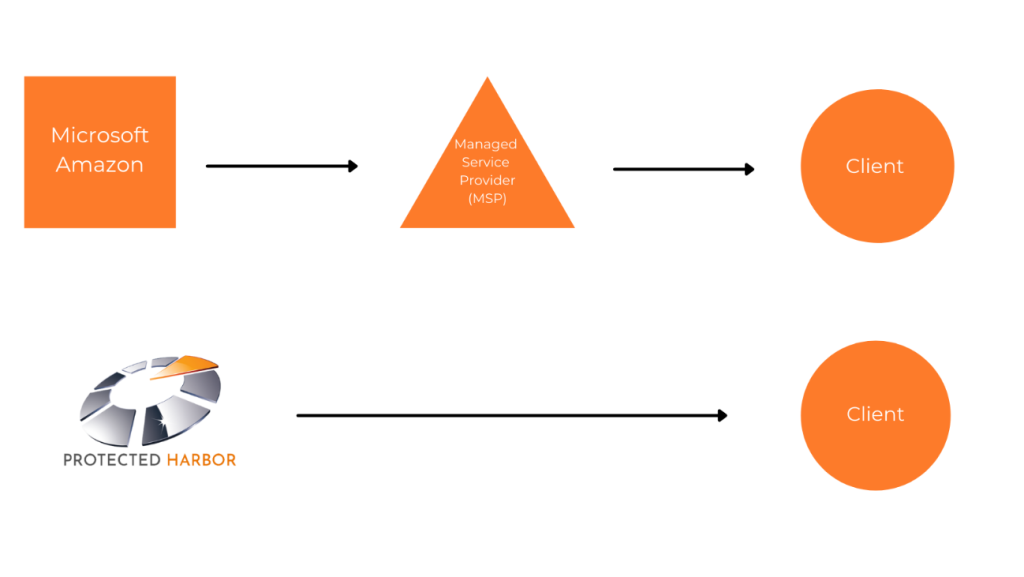 How MSPs are Abandoning Support and Adopting a Sales Model

Computer support today is provided by entities called Managed Service Providers or “MSPs”. In the world of MSPs where there are many players and it helps to peer behind the curtain to see who can stand by their own technology and who may just be a glorified reseller. It’s becoming less and less common for MSPs to stand behind their offerings, it’s commonplace to be reselling a patchwork of disconnected services instead of offering an integrated suite. This ends up creating a line of communication between the company creating the product (Microsoft, Amazon, etc.) and a middle man who is now just a reseller. It’s becoming common that these middle men are becoming less technology-focused and more sales/product focused. The age old question when it comes to sales is “where does it end?”, no one on the other end of your leased technology is held accountable for any shortcomings and often, in the rare chance you can reach someone, they seldom care. This only further proves the point that eventually these other MSPs will take on the role of salespeople without being able to handle the deep technology problems since they’re typically offering a plug and play solution.

Key factors in what makes a valuable MSP

One of the most valuable assets an MSP can have is response time to problems, a quick response time can mitigate catastrophic system issues, save you money and preserve clients. Any time something is unusable (including due to a crash) that’s valuable time a company is offline and potentially vulnerable to losing data or even being breached. There must be a company to help stop the bleeding, which will almost never be the same company that actually provided the software. In most businesses, IT being no exception, knowing and understanding the depth of a problem is sometimes the most difficult task. Second is difficult only to create an efficient, cost-effective and preventive way to solve the problem in a timely manner. We believe that the ability to problem solve and employ preventative measures is the key to preserving a relationship, especially a relationship based on technical support.

Computer support companies are slipping in response time as they change. MSPs are changing from understanding technology to becoming resellers of Office 365, Windows 365, Azure, AWS, or other cloud providers. 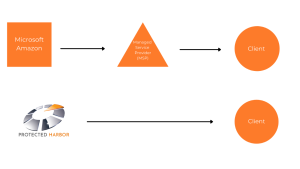 As you can see from the diagram above, an MSP essentially operates as a glorified middle man but only to do the job of providing the digital leasing for products but not the support. As you can see Protected Harbor brings the highest quality technology tools and support directly to your door.

Computer support is critical for a business to operate and to be successful.  With reduced support staff the end result is client frustration and eventually, a feeling that the computer support company doesn’t care or even worse, isn’t able to solve a complex technical issue if one was to occur. Ultimately, this lack of in-depth understanding begins to decimate consumer confidence and creates friction in client relations.

Protected Harbor is different.  First, we care, but more importantly, we also aren’t agents becoming salespeople for Microsoft or another cloud vendor.  We operate our own private cloud, allowing us to instantly respond to issues.  Since we operate our own hardware in our data center we can predicate and plan for failure, allowing us to create failover plans so that when a piece of equipment fails the client doesn’t experience an outage.

With our Protected Desktop, we make sure that your business is completely covered by offering full support monitoring, twenty-four-hour access from any device, ransomware protection, cyber-attack protection, and all routine maintenance included. With Protected Desktop, you’ll have access to all of our Protected Data Center redundancies which allows us to more precisely monitor and understand the depth of any issues that may occur since we know exactly what we’re looking for.

Operating our own private cloud allows us to develop proprietary technologies like our Application Outage Avoidance (AOA).  AOA is when we can predict a problem and execute a pre-designed action to avoid an outage.  For example, if a server is running low on disk space, add some disk space to avoid an outage and then we contact the client to determine the reason and how we should adjust the system.

Overall, everyone has different needs from their MSP, as well as expectations. It boils down to what your “must haves” are and what you can live without. At Protected Harbor we make sure that you don’t have to make that decision, as we provide everything you would need to keep your business security to be successful.

We help your business grow by connecting you to your customers. 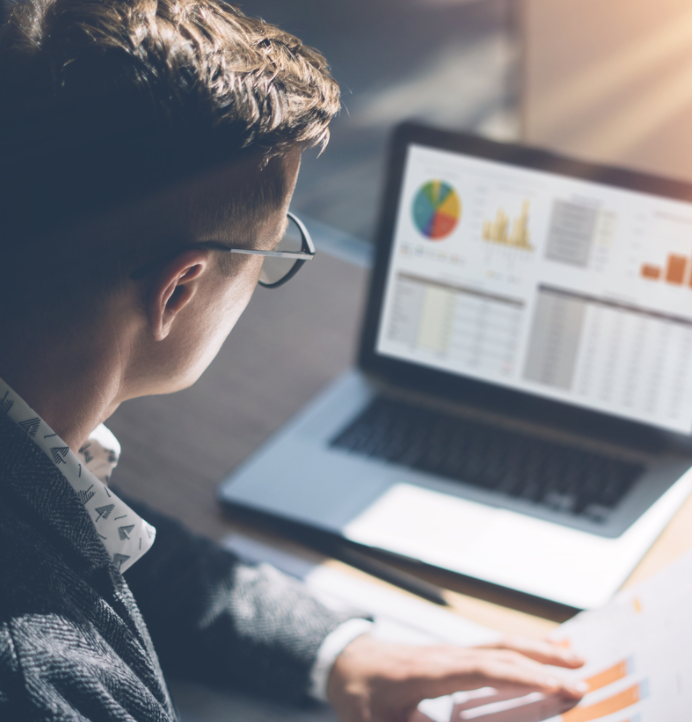 What Exactly Is Protected Desktop?

So many companies these days are boasting about their “cloud” offerings. And since vendors don’t always define the word “cloud” the same way, how is an end-user consumer supposed to figure it out? So for the purposes of this BLOG, think of the cloud as hosting something (apps and data) somewhere else besides your onsite… 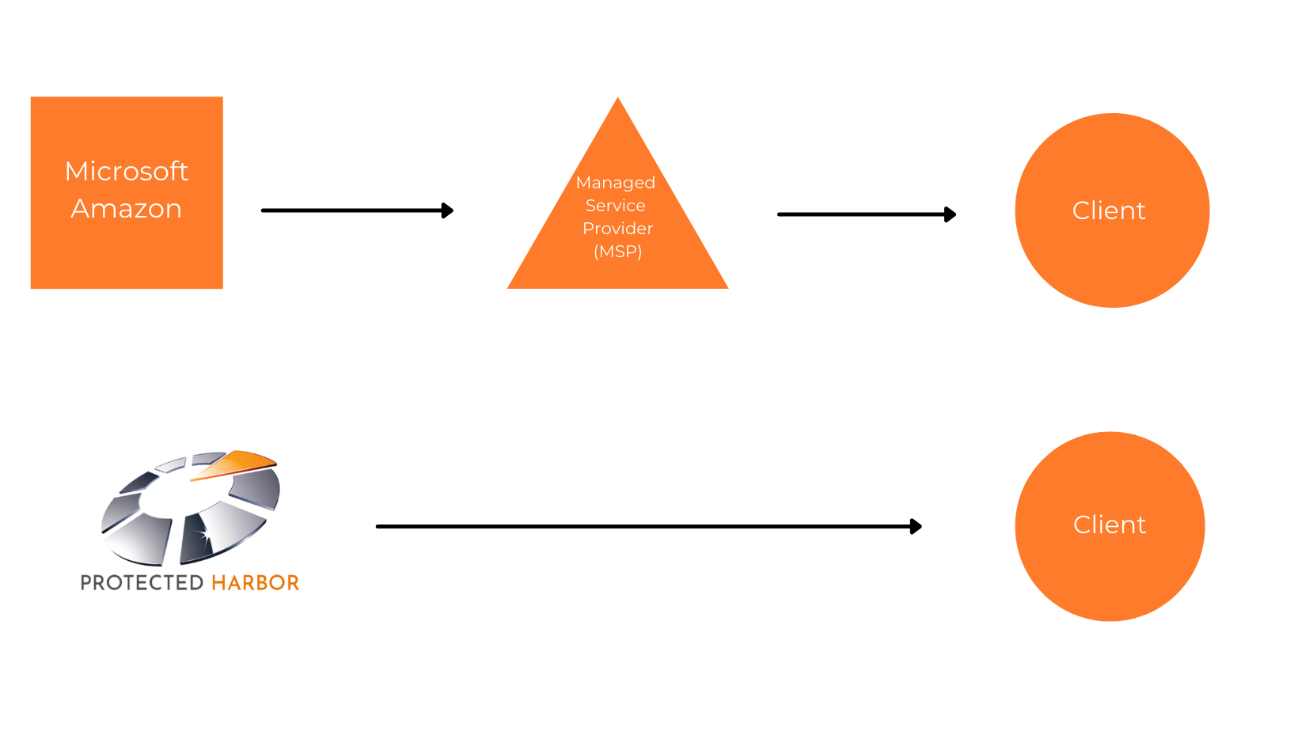 How MSPs are Abandoning Support and Adopting a Sales Model

Computer support today is provided by entities called Managed Service Providers or “MSPs”. In the world of MSPs where there are many players and it helps to peer behind the curtain to see who can stand by their own technology and who may just be a glorified reseller. It’s becoming less and less common for… 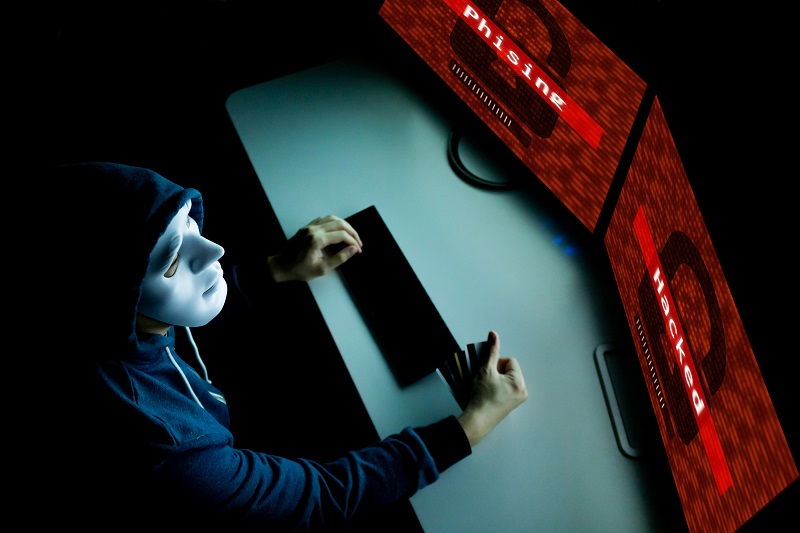 Google Documents is one of the most used applications in business for sharing and collecting data from multiple entities. Now, hackers are using sophisticated pages to mirror those of Google Documents log-in screens hoping to trick users into offering up their valuable log in information to not only steal data but increase the reach of… 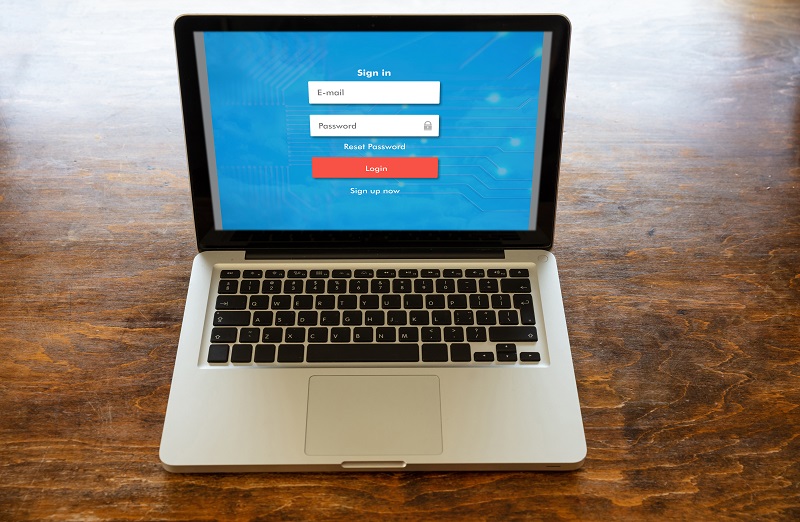 The Emerging Way Around 2FA

With individuals and companies understanding that security and phishing risks are on the rise, the implementation of 2FA (2 Factor Authentication) has become increasingly more prevalent. 2FA allows a user to add a level of security by adding another “factor”, besides their password that they must enter correctly to gain access to their account. Typically,… 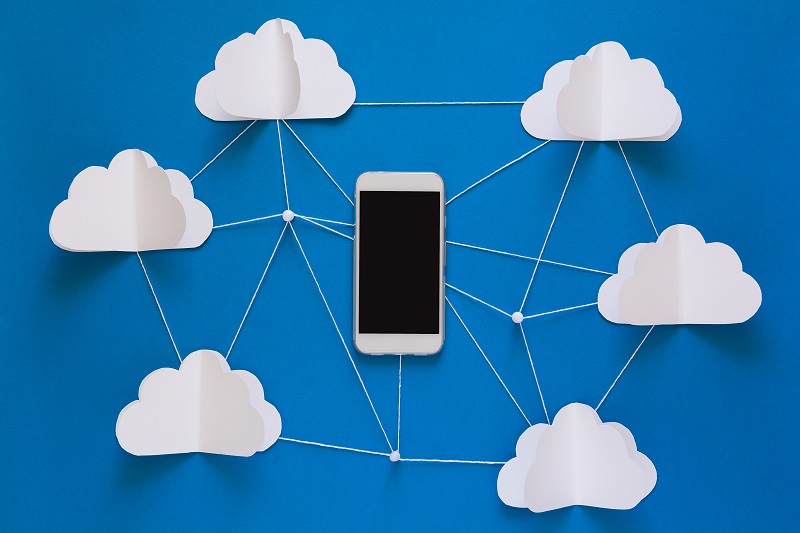 Learn the fundamentals After the inception of the cloud in the world of technology in 2006, we saw a rise in the number of providers delivering ascendable, on-demand customizable applications for personal and professional needs. Identified nowadays as cloud computing, in most basic terms it is the delivery of IT services through the Internet including…